53 French Bulldog Facts That Will Pique Your Interest 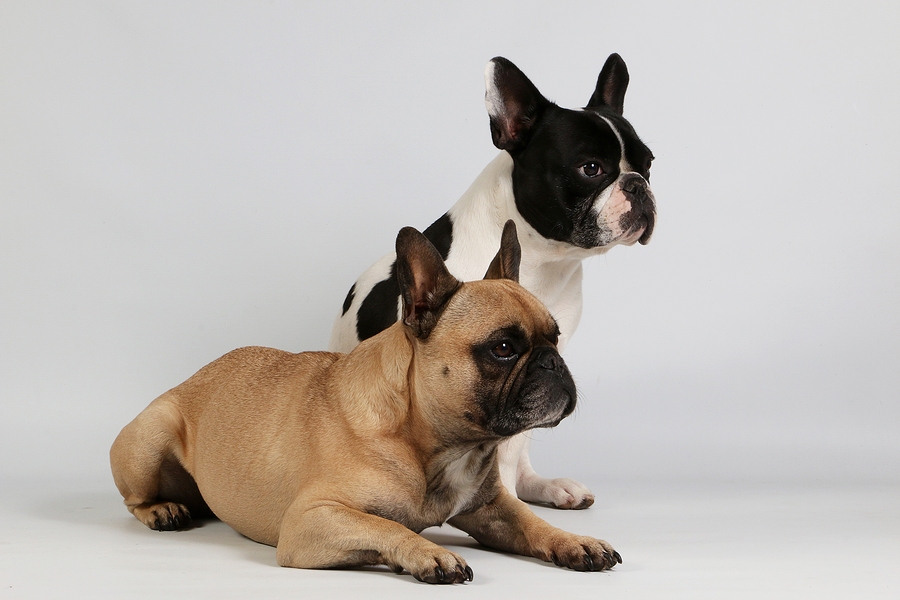 Frenchmen, Frenchies, Bat Pigs, Bullies, or whatever else you want to call these stocky little attitude-packed bundles of laughter – French Bulldogs are the dog of the moment. They are voted as one of the most popular dog breeds in the USA.

Here are 53 French Bulldog facts you may find interesting, funny, or important

#1. The average French Bulldog will reach a full life stretching between 10 to 12 years.

#5. You can tell if your Frenchie is overweight if they are breathing heavily after little exercise, are unable to groom themselves properly, and have no muscle definition.

#6. Overweight Frenchies are vulnerable to a variety of different diseases including diabetes and heart disease.

#7. A French Bulldog being underweight can be a sign of an even bigger issue – but isn’t always! They could have parasites or a serious disease, such as kidney disease or gastrointestinal disease.

#8. Frenchies come in many different colors, such as fawn, pied, brindle, and even blue-grey. There are even a number of variations among those categories as well.

#10. Pied Frenchies are white/eggshell colored with one or more patches of a dark color.

#11. Brindle French Bulldogs have a predominantly dark coat with light hairs spattered and mixed in. The chest, head, neck or toes of most Brindle Pied French Bulldogs are decorated with white.

#12. Blue/Grey Frenchies are very rare. These French Bulldogs are the result of a diluted gene inherited from both their parents. The diluted gene turns the pigmentation of the black color into a blue-grey pattern.

#14. With a distinguishable face and trademark big ears, French Bulldogs are also full of life and rich in personality. They are highly loyal and affectionate, love companionship and children, enjoy games and playtime while being just as comfortable snuggling up to their owners.

#15. French Bulldogs are loving creatures that show large amounts of affection and loyalty toward their owner.

#16. French Bulldogs are a great option for people with children or grandchildren. The kids can actually give the dog some well-needed play time.

#17. Frenchies are not meant for people who work very long hours every day. They require the love and attention of their owner.

#18. French Bulldogs are social creatures, and they generally get along with other dogs if socialized at a young age.

#19. They don’t typically bite. They may nip while they are being antagonized, though, but they would prefer to trust humans than attack them.

#20. Frenchies make great lap dogs. While they enjoy the company of kids and could play forever, they also make a great companion for an older person.

#23. The vet expenses of owning a French Bulldog may be as low as $500 a year or less, however, if your pup needs surgery this could quickly skyrocket!

#24. Due to a short nose and scrunched face, French Bulldogs tend to snort, wheeze, grunt, and snore more than other dogs.

#25. A common French Bulldog health issue is that they’re more prone to overheating and heatstroke compared to other breeds.

#26. Due to additional exposure to the surrounding environment, yeast infections of the ears are a frequent problem that Frenchies are prone to developing.

#27. Frenchies don’t have much of a snout to protect their eyes from scratches or bumping into things. Dry eye, corneal ulcers, and cherry eye are the most common eye problems your Frenchie may experience.

#29. Frenchies sometimes pay a cost for their adorable ears as they are prone to ear infections.

#30. They are faster than you think, love to play for hours on end, and are eager to go for walks or play with other dogs.

#31. Although French Bulldogs are generally low energy and are happy with apartment living, they need exercise just like the rest of us. Making sure your dog gets exercise at least once a day is recommended.

#32. As a breed, Frenchies are less barky than many other small breeds, but they still bark.

#33. French Bulldogs have been known to be sensitive to allergens found in food or the environment around them.

#34. The most common food allergy for a Frenchie is related to certain proteins, which requires them to have leaner meat.

#35. Because Frenchies are bulky in build and stature, and they have a compacted airway for breathing, heat can be difficult for them to endure. And, while all dogs suffer in extreme heat, very high temperatures can be deadly to French Bulldogs.

#37. The soft, back roof of the French Bulldog mouth is often too long and obstructs the airway.

#39. Due to their compact size, short legs, and lack of snout, these dogs were just not made for the water. So while it might be tempting to let your Frenchie cool off in the pool it’s important to know that they absolutely cannot swim.

#40. The folds on a Frenchie’s face are certainly adorable, but dirt and gunk can get trapped in these wrinkles if they’re not properly cared for. Bacteria can also grow in this area if too much moisture gets trapped there.

#41. Frenchies are not all born with the same tail length. Once upon a time, breeders would dock some or all of a Frenchie puppy’s tail in order to score more wins in the show ring. This practice is now frowned upon.

#42. Because they are prone to Brachycephalic Syndrome, Frenchies can benefit from using walking harnesses over collars.

#44. French Bulldogs share traits with Boston Terriers as they are both medium built and share a flat, pug-like face. They also trace their origin to the English Bulldog.

#45. French Bulldogs and Pugs are regularly mistaken for one another due to their similarities. Both breeds are small in stature, don’t require much exercise, and have flat faces.

#46. Due to the shape of their jaw and faces, Frenchies can inhale too much air if they eat their food too quickly. This can cause intestinal distress which can lead to vomiting.

#47. Frenchies are at a higher risk of getting cold faster than long-haired and/or bigger breeds. This is because they carry less body fat and lack a thick undercoat to keep them warm.

#48. They are quite a stubborn breed. Once they learn something they will stick with it forever, but that initial learning phase can be a challenge. This can make potty training frustrating!

#49. Just like other Bulldogs, Frenchies have a tendency to drool… a LOT! Especially when they are a little puffed out or overheated.

#50. Nasal hyperkeratosis is a very common problem for French Bulldogs. This condition causes a protein overgrowth and leads to a dry nose that will eventually crust and peel if not cared for properly.

#51. It is common to see a clear discharge from the nostrils of a Frenchie if they have environmental allergies.

#52. Frenchies are naturally friendly and sociable, but they are also protective of their owners. For this reason, you want to make sure your Frenchie is comfortable around other dogs and people from a young age.

Got a French Bulldog fact you want added to this list? Let us know in the comments below.