French Bulldogs vs Pugs: Similarities, Differences, and Advice For Owners 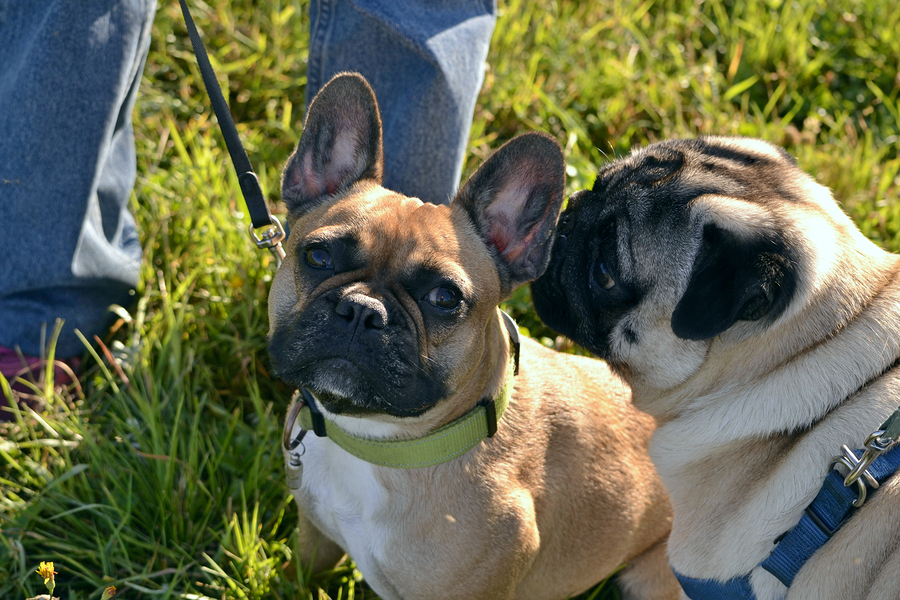 French Bulldogs and Pugs are regularly mistaken for one another due to their similarities.

Both breeds are small in stature, don’t require much exercise, and have flat faces.

But even with their similar physical attributes and tendencies to love the couch, Frenchies and Pugs have a number of differences too. As any lifelong Frenchie owner would attest!

To help you understand the two breeds better, below is an in-depth analysis of the key similarities and differences.

Similarities between French Bulldogs and Pugs

However, despite their notable similarities, they have differences that stand out too!

Differences between French Bulldogs and Pugs

French Bulldogs are the successors of a breed of bulldogs owned by the Molossians, an Ancient Greek tribe. They were used as attacking dogs until the game was banned in the 19th century. The first breed of French Bulldogs came about by crossing the Bulldogs from England to France. This was mainly because the bulldog owners immigrated to France in search of better opportunities. Frenchies soon became fashionable “lap” dogs.

Unlike the French Bulldog, the Pug originated in China. People presented the Pugs as presents to the royal family. In the mid-16th century, the Pug was imported to Europe and became popular among European royalties. The Pug went on to become a Queen Victoria royal family favorite.

Due to their stubbornness, training Pugs can be quite challenging. It is advisable to train a Pug within the first six months or risk the chance of severe challenges in doing so at all. Even if you do start early, training your Pug is no walk in the park.

Training French Bulldogs could also prove to be a challenge, especially since they are naturally lazy. Although Frenchies are highly trainable, it is vital to note they are easily distracted. To address the issue of their short concentration span, you need to engage your French Bulldog in short training sessions. Shorter sessions ensure you maintain your dog’s concentration, and of course, teach them new tricks and helpful habits.

The average lifespan of a healthy French Bulldog is 10 to 12 years. However, French Bulldogs can live up to 18 years in the right environment and with the best care. On the other hand, Pugs live for around 12 to 15 years meaning they have a slightly longer lifespan on average. It is essential to understand that the lifespan of both the Pug and French Bulldog is dependent on many factors. Some of the factors include diet, lifestyle, environment, and overall health.

A healthy Pug weighs up to 20 pounds while a male French Bulldog can weigh up to 28 pounds. Since both breeds are prone to rapid weight gain, it is essential to know when your lovely pet is overweight. If your pet has difficulty breathing after exercise or is not able to groom themselves, then consider talking to a vet about your dog’s weight.

French Bulldogs tend to be laid back with a relaxed attitude which makes them affectionate. On top of being an excellent companion for families, the French Bulldog does not bark a lot at strangers thus making it easy to live with in a close-knit neighborhood.

Similar to the French Bulldog, the Pug makes a great companion as it is warm around kids and family. But expect the Pug to be more demanding in regards to attention.

To perfectly groom your Pug, a lot more has to be done as compared to a French Bulldog. Your Pug will shed fur frequently. The fur can be messy, especially if left to accumulate around the household. French Bulldogs shed moderately which makes them less demanding in regards to grooming.

Both breeds are prone to health issues such as breathing difficulties, weight gain, and overheating, due to their flat-faced structure. They also share a common tendency for environmental and food allergies.

While both breeds can experience eye problems, Pugs are slightly more prone to these conditions due to their protruding eyeballs. Similarly, Frenchies can more easily get ear infections or irritations because their ears are exposed to the elements.

Both Pugs and Frenchies don’t require a lot of exercise. But you will find that Frenchies are generally more energetic and active than Pugs. On average, a French Bulldog’s breathing capabilities and stamina are stronger than a typical Pug, even though they may appear lazy for most of the day!

Although choosing between these two breeds can be difficult, the above information should help you in determining the best option for your home.

It is important to remember that dogs are more than just pets, they become family members the moment they step into your house.

Pug or Frenchie, be sure to shower your dog with love and affection. By doing this, you will ensure they live a happy, healthy and active lifestyle.