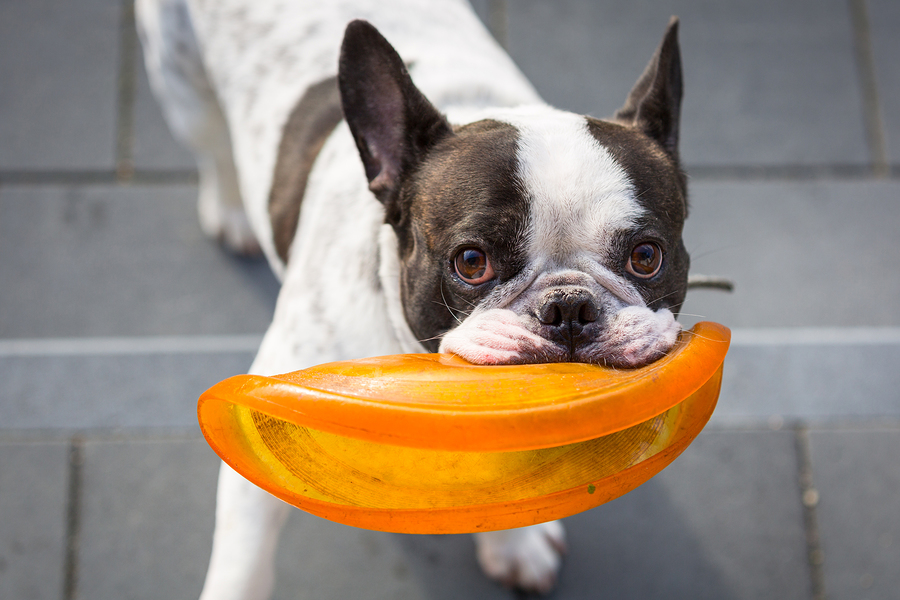 There is a common misconception that French Bulldogs are lazy, unenergetic dogs…

I can tell you right now, that is far from the truth!

Unlike the English Bulldog, which is typically happy enough to lounge around for most of the day, Frenchies love to exercise. They crave the outdoors, a bit of playtime, and need stimulation to satisfy their inquisitive side. Especially as puppies.

Yes, Frenchies are happy to binge Netflix with their parents every now and then, but only after they’ve got their stimulation for the day. Otherwise, they’ll bug you to play with them until you crack. And who can turn down those adorable eyes and cute face?

When are French Bulldogs High Energy?

You can normally expect French Bulldogs to have a lot of curiosity and energy as a puppy – just like most puppies. But some Frenchies will extend their puppy-like ways into adulthood and always hold onto that energetic streak.

Even though Frenchies don’t cause much of a fuss by barking and are well-suited to most living quarters, they still love to bound around in the outdoors and go on adventures.

These dogs usually love to play rough and will chew on their toys or find a way to get into trouble. If you don’t redirect their energy into something useful as a puppy, they can turn that energy into destructive habits for the home.

A lot of people consider the personality of the French Bulldog as one of the best when it comes to smaller dogs. You have a fun-loving and adorable dog, but they will also display charisma and are well-mannered as an adult.

Important to note, you have to raise a dog like this with enough attention because they can become reclusive, noisy and aggressive if you don’t. In particular, pay special attention to their puppy years because this will have a big impact on them later in life.

Are French Bulldogs Ever Low Energy?

After they have exited the stages of puppyhood, their puppy-like enthusiasm may start to wane. They lose much of their energy during this time.

Still, this dog remains active socially, and a well-trained French Bulldog loves to be at the center of attention. Luckily, this dog never loses its joy for causing trouble and will always be up for playtime.

In general, French Bulldogs have a fairly low energy level as adults, when compared with other dogs, but you do have exceptions to this rule. It’s not uncommon to have a dog that has much higher energy levels even well beyond their puppy years.

Regardless of their energy levels, you’ll still need to exercise them daily and make sure they are maintaining a healthy weight. If you want a more active Frenchie, the diet you feed your dog will play a big role in how active and energized they are.

The French Bulldog makes a good choice for an apartment in most cases because of its size and variable energy levels.

Basically, Frenchies are ok to sleep and be lazy, but when given the opportunity will play for hours on end!