It’s hard to scold the sweet, scrunchy little face of a French Bulldog…

But when they’ve demolished the remote for the second time in a month, it’s time to get serious about training.

Consider this your guide to understanding and correcting French Bulldog behavior problems.

Do French Bulldogs have behavior problems?

French Bulldogs can make wonderful companions. They’re smart, loyal, playful, sociable, and good with kids, so they have many qualities of wholesome family pets.

That said, Frenchies aren’t always angels. They can and do come with behavioral issues, and depending on the dog, these issues can have many different causes:

When assessing the behavior of your French Bulldog, it’s important to consider the cause before you start working towards a fix. Different problems will have different solutions.

What are the most common French Bulldog behavior problems?

If you’ve noticed any of this conduct from your French Bulldog, it might be time to take action.

Most dogs will gleefully tear into a toilet paper roll at least once in their life. If it’s becoming a pattern, however, it might be a sign of something more serious like separation anxiety. It could also have a physical cause like pain from teething or an undiagnosed injury.

French Bulldogs aren’t aggressive by nature, but they can develop rough or violent behaviors when they’re abused, unsocialized, or just poorly trained. They can be particularly prone to displays of dominance when they’re in a house with multiple dogs.

As active, playful dogs, most Frenchies love a good walk. This can become a problem when they pull on the leash or lunge at bunnies and interesting-looking joggers. It can even lead to injuries if you aren’t careful.

Urinating or Defecating in the House

Frenchies can be slow to housebreak, so don’t fret if you have a young puppy that’s prone to accidents. If your dog is older, however, or if they start making messes around the house for no apparent reason, the problem could be physical, mental, or emotional.

Howls are cute from tiny little pups. They’re less cute from full-grown dogs that wake you up in the middle of the night with a serenade! If your Frenchie is driving you nuts with their vocalizations, you’ll need to take steps to correct them.

How do you stop French Bulldog behavior problems?

Every dog is different, and the training techniques of one pet owner might not work for another.

Speaking very generally, however, here are some steps that you can follow for fixing a French Bulldog’s behavioral problems.

Are they bored? Are they stressed? If they’re peeing on your shoes because of a health issue, it won’t do any good to punish them like they’re misbehaving on purpose. On the flip side, if they’re just acting out to get attention, coddling them can make it worse.

2. Make a plan of action

Maybe you can buy more chew toys for a teething puppy. Maybe you can crate- or kennel-train a dog that can’t be trusted to roam the house. There are many solutions out there for undesired behaviors in dogs, so it’s just a matter of finding and implementing them.

3. Stick to your guns

Training your French Bulldog will require time and patience. They’re stubborn little creatures, and they aren’t always welcoming of change, especially if the change involves spending less time with you or not getting the toys or treats that they expect. You just have to be consistent. Remember that you’re doing it for their own good!

Are you ready to fix the behavioral problems of your French Bulldog? Use these tips to figure out why they’re giving you a hard time and what you can do about it.

There’s a very good dog hidden inside of your misbehaving pup. You just have to draw it out! 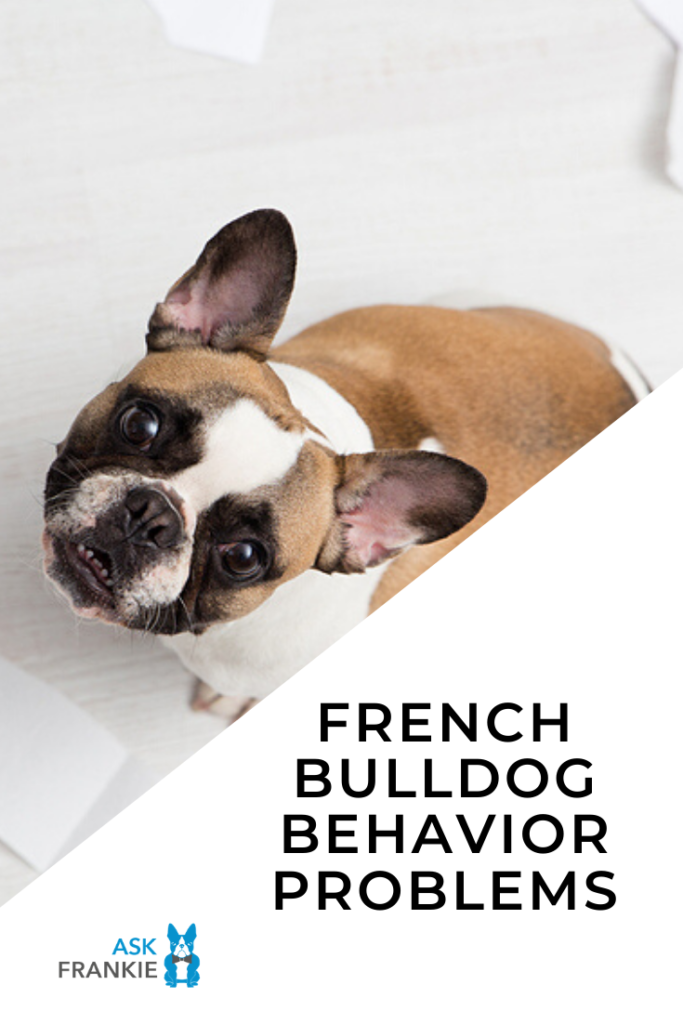