Are French Bulldogs Good With Other Dogs? 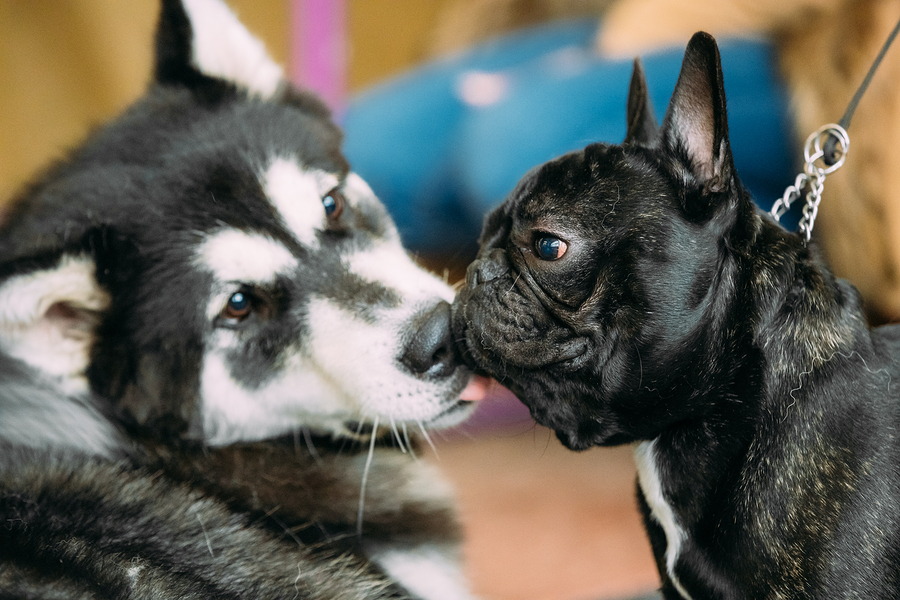 Note: This is a guest post written by Ami, owner of @louiefrenchbread. Thanks Ami!

The question we’re answering today is whether or not French Bulldogs are good with other dogs?

Well, Frenchies are regularly ranked as one of the top dog breeds in the world for good reason. They have been owned by many celebrities, both in the past (the Rockefellers and JP Morgans) and present-day (Lady Gaga, Hugh Jackman and Leonardo Dicaprio).

Why is this breed so popular?

French Bulldogs are wonderful companions. The breed is known to be friendly, playful, bright, affectionate and charming. They don’t bark much, but with their adorable bat ears, they are very alert and make wonderful watchdogs.

Are French Bulldogs good with other dogs?

Frenchies will happily adapt to lots of different living situations because they want to please their owners. When it comes to other dogs, Frenchies interact well with other dogs and household pets as long as the owner socializes them early.

Before I settled on getting a French Bulldog, this was definitely a factor we considered. Our French Bulldog, Louie, is a happy, playful little guy who we can trust to interact safely with my family’s Dachshunds and rabbit.

He was introduced to them at an early age. Luckily for us, he is treat driven. Therefore he is rewarded for good behavior when he shows acceptance towards other animals.

Is he perfect? No! He can be territorial and jealous with the best of the other breeds. Yet we can rest assured that he would never harm the other animals. Most of the time he tries to play with them. However, he will sense when they are not interested and quickly run off to find his favorite bone to chew. In our experience, this behavior is typical of a majority of French Bulldogs.

Often when we are out on walks we are flogged by multiple people of all ages as well as other dogs. Louie becomes very excited and may jump up and nip. At times this can be alarming to young children or other dogs, however, he has the best of intentions and would not intentionally cause harm.

Can French Bulldogs show aggressive behavior to other dogs?

All dogs become territorial especially if they feel threatened or jealous. French Bulldogs are no exception.

Being the center of attention

Frenchies love to be the center of attention. For example, Louie gets territorial if I show attention to the other household pets. He shows this by trying to push the other animals off my lap by butting his head against them.

This is not a sign that he wants to fight, but more so, that he is voicing his complaint and trying to tell others to stay away. He also, on occasion, will push against my arm as an order for me to pet him when he wants more attention.

Getting confrontational over food

French Bulldogs could also show confrontational behavior over food from time to time. They may let out a low growl if you give a treat to another dog or if a dog gets close to their food dish. This is usually just a warning sign and won’t escalate into aggressive behavior.

Another thing to be aware of is that most Frenchies don’t want to share their toys and can like to play rough. Rough play is usually due to over-excitement, rather than true aggression, so monitor their behavior but don’t freak out if they get a little bit rough.

Louie, for example, is only 20 lbs, but he thinks he is one of the big dogs. He has no fear of jumping into the mix if he sees a couple of big dogs rolling around.

Overall, French Bulldogs interact well with other dogs, pets, and children as long as there is early socialization. Most people want a dog that is friendly not only toward people but also friendly with other dogs.

Who doesn’t want to be able to bring their best furriend to a dog park and know they won’t attack those around them?

If you are looking for a companion that is lovable, interacts well with dogs and other animals, then a French Bulldog could be right for you!

When she isn’t writing, Ami can be found playing, petting, walking and giving her French Bulldog Louie lots of treats.

One Reply to “Are French Bulldogs Good With Other Dogs?”