Why Is My French Bulldog Growling? Reasons and Remedies 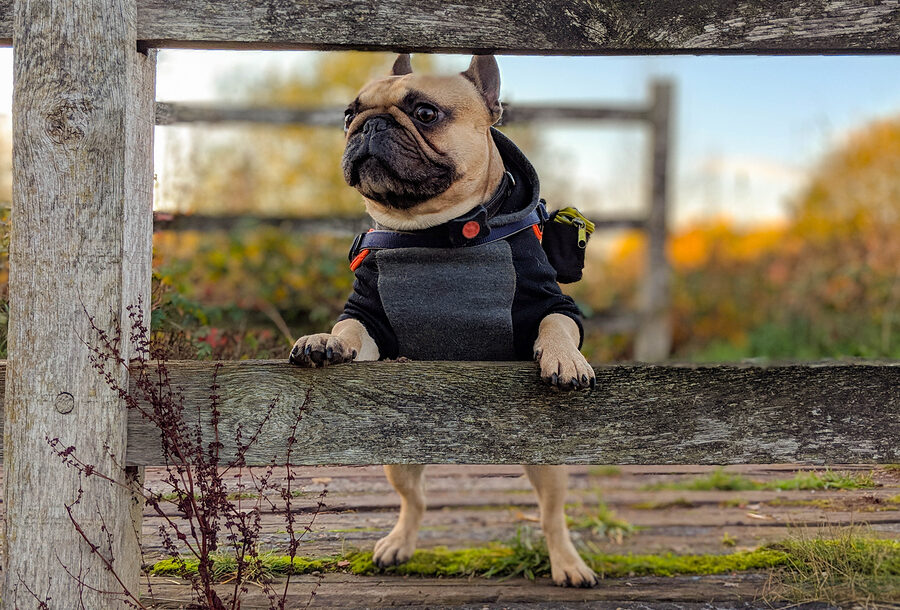 If you’re the proud owner of a French Bulldog, it makes sense that you want to treat your dog with the respect that it deserves.

Because dogs communicate in different ways than humans do, it is important to stay educated on how to interpret your dog’s behavior. By familiarizing yourself with how your dog is trying to express itself, you will be able to recognize when something is wrong and take appropriate action.

When your French Bulldog is growling, it is most likely due to a reaction to an environmental situation. However, growling can represent a number of different things, so I’ve created a list of resources to help you identify why your dog is growling.

Before we get into this article, it’s important to mention that if you are ever concerned about the health of your French Bulldog, you should immediately consult a veterinarian. Advice from the internet is no replacement for the opinion of a medical professional, so it is important to always be sure that you are receiving reliable information.

Why is My French Bulldog Growling?

One of the important things to understand when you hear your dog growl for the first time is that growling can result from a wide variety of different situations. For example, if your Frenchie is around another dog that it doesn’t like, growling is an understandable reaction to that situation. Dogs like to signify to others that they have control over a certain area, so it makes sense that your dog would growl as a means of asserting its dominance.

There is also the possibility that your Frenchie is growling as a result of being jealous of another dog. Oftentimes when a dog is on a leash, it will feel negative reactions towards other dogs that are able to walk without leashes. The lack of freedom of motion causes feelings of resentment and might result in growling.

Another probable cause of growling is whether or not your dog is intimidated by another creature they have come across. French Bulldogs are not the largest type of dog around, but they don’t usually back down from confrontation. Especially when their owner is by their side! However, intimidation can play out in a variety of ways, not just by growling.

There are also other reasons that your dog might be growling. Sometimes growling is not a signal to other dogs, but instead the humans that take care of them. If your dog is growling while being introduced to another human, it could be trying to communicate to you that the person it is meeting doesn’t seem very nice.

Sometimes a French Bulldog will growl because it is in pain, causing it to loudly try and reach out to you. This is a situation in which you must be prepared to take your dog to a veterinarian immediately, as it is often a serious situation if your dog is resorting to growling.

Should I Be Worried About My French Bulldog Growling?

In most situations, your French Bulldog is not growling as a way of being aggressive towards others. Instead, it is trying to communicate with you, so try and listen to it and see if it is directing you towards a particular action.

For example, if you touch your French Bulldog in a place that isn’t comfortable, it might growl as a means of telling you that the area wasn’t comfortable.

Of course, if your Frenchie is growling all the time, it could be a behavioral issue that needs to be addressed.

If your French Bulldog is growling and there is no other dog, person or another type of environmental cause, you should take your dog to the vet’s office immediately. A medical professional will be able to provide you with an accurate diagnosis of your dog’s condition.

How Can I Stop My French Bulldog From Growling?

Stopping your French Bulldog from growling can only be achieved by analyzing the surrounding area. For example, if you are walking your French Bulldog and it begins growling uncontrollably in an area where there are other dogs, it could be that your dog is intimidated by the other animals. In this situation, all you have to do is remove your dog from the area and it should calm down quickly.

In the same way, if your dog is upset at the people you are introducing it to, the best remedy to the situation is to leave the area that is stressing out your dog. If that isn’t possible, trying to comfort your dog is always a great option. Bringing toys or other types of comfort items can help keep your dog at ease and demonstrate that the situation is actually comfortable for them.

One of the most important things to remember when your French Bulldog growls is that you must treat your dog with respect. The dog is often trying to communicate or protect you, so chastising the dog will not promote healthy communication methods.

If growling persists or you start to feel worried about your dog’s health, bringing your dog to a medical professional is the only way to truly know what is going on. Your vet will also be able to prescribe remedies that are specifically tailored to your dog’s overall health.

The most important resource for French Bulldog owners will always be the local veterinarian’s office. Though some medical offices might be expensive to attend, there are affordable clinics around that specialize in helping your pets get the care that they need.

If you want other resources on how to deal with a growling French Bulldog, I also recommend these guides from PetCareRx and DoggyDogWorld.

All in all, Frenchies aren’t known for growling a lot. So, if you have an ongoing problem with your French Bulldog growling, it’s best to get it looked at.

I hope this guide has been helpful so that the next time you find your French Bulldog growling, you know just how to interpret it!