Are French Bulldogs Easy to Train? Your Questions Answered 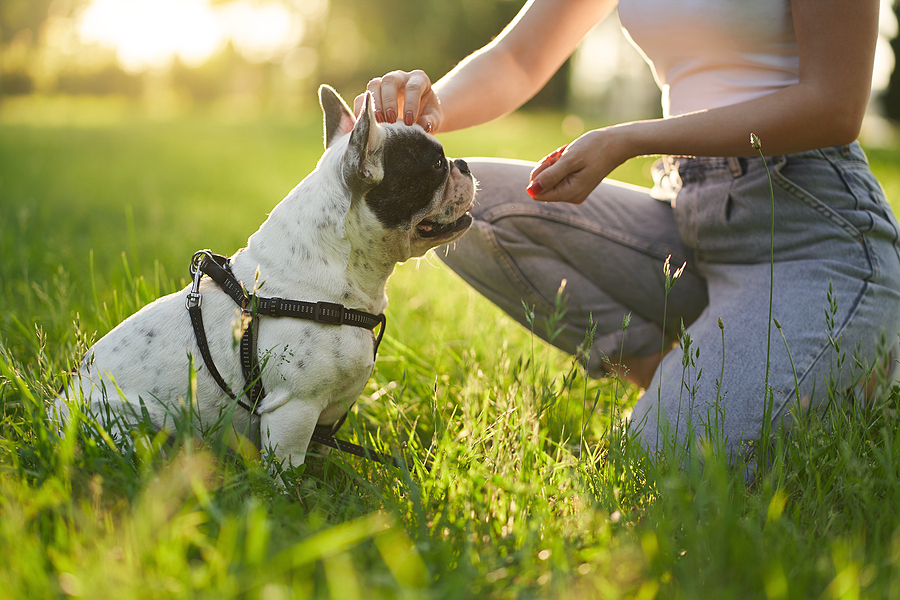 Maybe you have a brand-new puppy. Or perhaps you’re trying to teach an old dog new tricks. Whatever your reasons for wanting to train your French Bulldog, here are just a few ways to move past “sit,” “stay” and “oh no no no, not on the carpet!”

Are French Bulldogs easy to train? The answer is both yes and no.

On one hand, Frenchies are usually regarded as smart, agreeable dogs who can pick up on what behavior makes their owners happy. They also tend to be very food and praise-motivated, so they respond well to training with lots of positive reinforcement.

Another nice thing about Frenchies is that they enjoy order and routine, so if you can get them used to a regular schedule for things like walks, mealtimes and potty breaks, they should thrive under the structure.

That said, French Bulldogs can be quite stubborn. This is especially true if you’re trying to train an older dog who’s set in their ways. You can overcome their resistance with love, patience and consistency, but don’t expect drastic changes overnight!

French Bulldogs can be a bit of a challenge to potty train, but again, the key is consistency.

Here’s a rough outline of how to potty train your Frenchie:

Generally speaking, it can take anywhere from 2 – 8 months to potty train your French Bulldog. You can start as early as eight weeks old, but it usually takes them until they’re a little older to fully grasp the concept.

How long does it take to train a French Bulldog?

The timeline for training your French Bulldog will depend on a variety of factors, including their age, personality, background and physical or emotional limitations.

If you have a puppy, for example, you might find it easier to mold their behavior than a fully-grown or recently-adopted dog who’s already set in habits and routines from previous owners. You might also run into problems if you’ve owned your Frenchie for a while and have been lax in their training up until now. They know good and well that you won’t really force them off the couch if they whine enough!

Another thing to consider is their health. Frenchies can be predisposed to certain health conditions, including conjunctivitis, joint pains, gastrointestinal distress, and Brachycephalic Obstructive Airway Syndrome (BOAS). These conditions can impact everything from their mobility to their mood. A Frenchie who’s tired of being bossed around is a difficult Frenchie to train!

One way to get timely results is to enroll your French Bulldog in an obedience course. At Pupford Academy, for example, you can sign up for all kinds of training modules that cover topics such as barking, leash walking, housebreaking, impulse control, and separation anxiety. If you don’t see results with regular practice over 30 days, you can get your money back.

Last but not least, it’s important not to give up on your French Bulldog. Even if you have the most stubborn little goblin to ever refuse a command, you can teach them to listen. It might just take a little time and a lot of love.

Are French Bulldogs easy to train? Ultimately, it depends on your dog. Just like humans, every Frenchie has a different temperament, and their “trainability” can depend on everything from how stubborn they are to how much they love treats or thrive within routines.